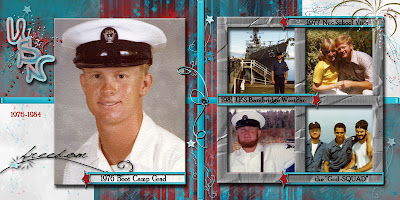 I was inspired to do this layout when I first saw the kit "For Freedom" by Eirene Designs (and thrilled when she accepted me for a OKC). I ended up having to scan in a chopped up wallet size pic of my honey's boot camp grad because I "lost" the 8x10! I've searched high & low and without success—it's going to drive me absolutely crazy until I find it. Meanwhile, with the scanned photo and PSE5, the enlargement did the trick. The photo of the 2 of us was taken during Nuc School, just a couple of months before we got married. The TV show "The Mod Squad" was popular in our day... so I thought it was kinda cute that the 3 fellows in the lower right pic became known as "The 'God'-Squad" because of their practice of getting together for prayer on the fantail(?).
♥~♥*♥~~♥*♥~♥
credits: For Freedom kit by Eirene Designs, font - Poor Richard 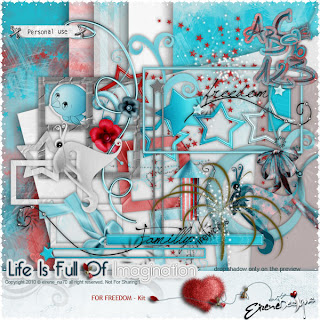